Have a Holly Jolly Whatever 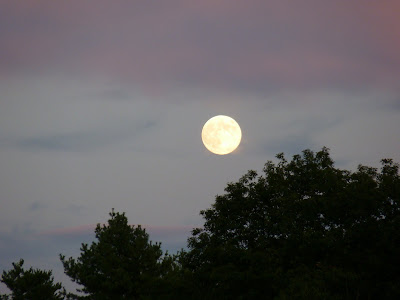 I actually took this photo at the September full moon, but liked it so much I thought I'd share.
Thus spake blogdog at 2:07 PM 2 comments: 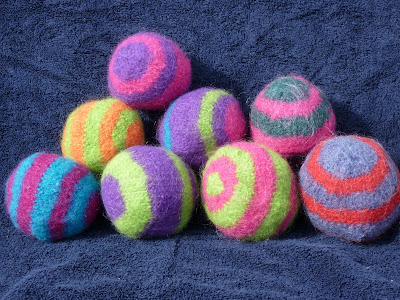 I can't stop knitting these felted dog toys! Here I've finished 8, and #9 is on the needles already.

It all started with the kit from Bully Woolies, which I picked up at a local yarn shop's going-out-of-business sale. (Rest in peace, The Stitching Mantis. We all miss you.) I opened the kit, realized that the yarn inside was my very favorite felting yarn (Lamb's Pride), and went to work.

These are knitted in halves on size 10 ½ DPNs; you knit the first half from middle to top, pick up stitches for the botton half, and leave a giant buttonhole in the bottom half as you knit. Everything shrinks a bit when you felt it, but you can still get the squeaker and stuffing inside. Stitch it closed and voila!

The original toys made from the kit are the orange-and-green one and the fuchsia-and-blue one. The rest come from leftover yarn in my stash. I bought bags of squeakers on eBay. If you're looking for a quick charity knitting project or a fundraiser, need to whittle down your stash or get rid of some leftovers, or even just like the idea of making your own dog toys for just pennies using leftover yarn from other projects... well, here's a project for you. Bully Woolies has kits for other felted toys, including cat toys, on its website — or ask your friend Google to help you find some free designs.

Once I've made even a small dent in my Lamb's Pride stash, I'm planning to try the pattern with other good felting yarns, such as Cascade 200 and Kureyon. I knew I'd saved all those leftovers for something! Watch for the next batch to appear on this blog once they're done.

The Clam Before the Storm

Nope, that's not a typo. It really is damp and sticky here, as we wait for Tropical Storm Irene to pass through. Yesterday dawned lovely and cool with high clouds, but as the day progressed, it just got stickier and stickier as the pre-Irene humidity rose and the pressure sank.

All the dogs at the Lakes Region trial yesterday were off, acting weird. They were probably responding to the changes in air pressure. Dinah was so interested in everything BUT the trial at hand that she ignored me the entire day. Aliens had kidnapped my dog and left me with a deaf one with ADD. I ended up having to excuse us from the ring because we were getting exactly nowhere. Better luck some other day.

We went to bed in the sticky air last night. What's worse: someone hit a skunk near our house last night, so all of the front rooms were scented with eau de pepe-le-pew. It hadn't completely dissipated by the time we closed the windows.

Now the rains are coming...

The big winds aren't scheduled to get here until this afternoon. We're prepared. The generator is gassed up, and we have dog food and beer. We have a sump pump if the rain water doesn't drain into the pond quickly enough. We lose power here so often in the winter that we're just glad we don't have to worry about not having heat if it happens during this storm. As long as the trees make it through, everything here should be okay.

(I do kinda hope my office building, which is more or less in the direct path of the storm, is closed tomorrow.)
Thus spake blogdog at 11:46 AM No comments:

Meditations on an Old Dog

My friend Ann, who has taken in more than one needy geriatric dog and who has spent whole lifetimes with others, has always said that old dogs are like old shoes. They don't ask for much. They're just comfortable to have around. They bring a quiet joy all their own.

I tend to think of them as Velveteen Rabbits — they might be old, slow, and lumpy with half their fur loved off, but they just grow more beautiful every day in the eyes of those who live with them and love them. Of course, old dogs have been "real" all along, but their slow march toward mortality lends them a more spiritual quality somehow. It seems as though they're closer to being at one with the Universe. 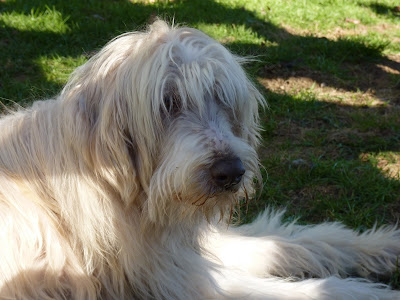 All three of my boys are seniors now. Charlie turned 14 on May 17. Badger's 9th birthday occurred on January 8. Famous Seamus celebrates his 9th birthday on November 2. It hardly seems possible that so much time has flown by. Only Dinah (who turns 6 this coming November) is still on the early side of her prime, and even then, The Princess isn't a baby any more. Maybe we have to start calling her The Queen instead.

It wasn't so long ago (or was it?) that I referred to Charlie as "the puppy." All through Duncan's and Doogie's long lives, he remained the baby of the family. When Doogie, the last of the "old guard," shuffled over the Rainbow Bridge at age almost-16, Charlie was still only 6 years old. He had established himself as Lord of the Realm many years before, and he ruled over all of the newcomers with a benevolent, but firm, paw. Little puppies gravitated to him, and he graciously instructed each one in the fine art of excavation. Many of my friends' yards sport (or sported) holes resulting from Charlie's famous tutorials on Dirt Appreciation.

The only thing Charlie likes better than dirt is water. At our old Beardie Bounces in NH, our hostess would make especially sure to have a kiddie pool filled with water for Charlie, no matter what the weather forecast.

These days, Charlie just grows more beautiful with time. His shaggy brown coat is thinner now, and he has lost a significant portion of the muscle mass that he had when he was younger. His hearing has taken on that selective quality that prevents him from hearing you calling him, but he can still pick up the sound of a sandwich being unwrapped from half a mile away. As old dogs do, he spends a lot of time seeking comfort, nudging for head rubs and samples of lunch. He does appear to spend some more time sleeping, but he still prefers to be outdoors, barking at the wild turkeys to get off his lawn and working on his latest tunnel.

Charlie's breeder still hears from some of his siblings' owners, but many of us have fallen out of touch with one another over the years. We do know that sister Bennet-J went off to the Bridge a couple of years ago, and that brother Tristan joined her in November. Brother Benny in California is still going strong, and so is sister Lucie in Nebraska. We don't know about the other three, but we hope that they're all still around and still running their respective households.

This week, Charlie suffered a bout of Old Dog Vestibular Disease (details on my Shaggy Dog Stories blog). He improves just a little every day; his nystagmus (twitching eyeballs) is essentially gone, his head tilt seems better, he can get up and down stairs, and he's getting stronger. He is starting to eat dog food again -- still mostly canned, but with some kibbles added in. Earlier in the week, the only thing he'd eat was canned Vienna sausages. He still sleeps a lot -- mostly in front of the bedroom box fan -- but he was a world class napper before the ODVD.

So many members of the Class of '97 (and earlier) have gone across the Bridge of late that it's about all I can do not to crush his creaky old bones to my chest and beg him never to go. I'm almost afraid that I'll leave someone off the list. Daisy went, and then Charlie's best brown buddy George, and Jubie, and Ghost... too many. Too sad.

Charlie's dad Jamie made 15, and his mom Taylor almost did. We can't know -- and don't think about -- how much more time we'll have with the old man, but we're mighty glad that he dodged the bullet this time.
Thus spake blogdog at 12:23 PM 4 comments:

Motivation for the Day 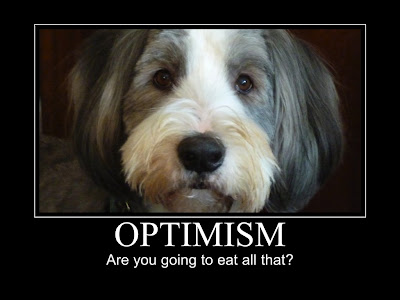 How to Be the Best at Practically Everything

Okay, I admit it. I've neglected this blog like an unloved houseplant. Instead of noisily observing my "6th blogiversary" with 24 hours of tweets and a full-press publicity blitz, I... wait, what was I doing? This blog turned 6 sometime in June, and even I missed it. But hey, vote for me for something! I feel as though I'm behind in my campaigning.

Not that I don't have a huge variety of excuses to apply. Here's the short list of things that have been going on since mid-March: 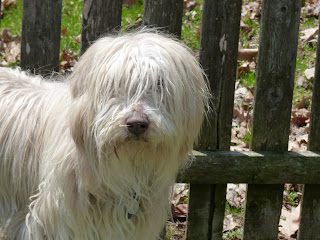 I intend (in my mythical spare time) to send this blog to Blog Rehab and make a nicer skin for it. I'm tired of looking at this one. (hey, it was the first Blogger skin I made all my own self. It's time to move on, though.) 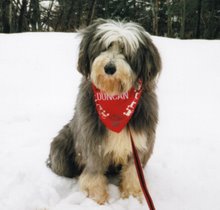 Get There From Here

I'm my3seadogs on Ravelry
Completed:
In Process:
In Limbo:
In the Frog Pond:

Don't Miss Our Next
Exciting Episode!